Gastric plication is a surgical procedure in which Dr. David Davtyan, similarly to the gastric sleeve, reshapes your stomach to make it smaller. However, while the gastric sleeve involves surgically removing a portion of the stomach, gastric plication relies on sewing the stomach onto itself to achieve the same result. This new smaller stomach makes you feel full faster causing you to eat less and lose weight.

Gastric plication is still in the investigational phase and has not been fully adopted, but it worthwhile looking into as theoretically it is reversible and not permanent like the gastric sleeve. So far studies have shown that those who have underwent the gastric plication procedure achieved less weight loss than other established procedures such as the Lap-Band, Gastric Sleeve, Gastric Bypass or Duodenal Switch.

So far reviews for the procedure have not come to a concrete conclusion in terms of the rates of failure and complication.

HOW THE PROCEDURE WORKS 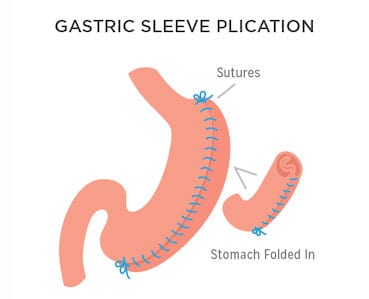 Gastric plication is the process of folding in the lining of the stomach and sewing it together in order to reduce the stomach to about 75% of its’ original size. This causes the patience to have the feeling of fullness quicker than normal, which translates to them eating less.

The surgery is done laparoscopically by Dr. David Davtyan at the Weight Loss Surgery Center Of Los Angeles, with small incisions and lasts between 40 minutes and 2 hours.

Patients can lose up to 55% of their excess weight in two years. The short-term results that this procedure shows are comparable to other more established weight loss procedures.

WHO IS A CANDIDATE?

In order to qualify for gastric plication, you must have a BMI of 30 or over, but it is recommended for patients with a BMI of 40 or over.

For patients with a BMI between 30-39.9, you must also have a seriously health problem that is related to obesity. The most common co-morbidities are:

If you have a BMI between 30-39.9, but do not have a co-morbidity, you may be a great candidate for the Gastric Balloon, which is a procedure that is not as invasive and non-surgical.

The gastric plication procedure requires a hospital stay of 1 to 2 days, after which you will need at least one week to recover at home. You will be fully recovered after 4 weeks.

Your post-surgery diet will be similar to other bariatric surgeries such as:

It is extremely important to follow your surgeon’s guidelines for diet and exercise for any bariatric surgery to be successful long term.

While some studies believe that Gastric Plication is riskier than other weight loss procedures, other studies have found it to have the same risk profile of the gastric sleeve or gastric bypass. Some possible complications are issues with digestion, excess/loose skin and the possibility of regaining the weight.

A common side effect from the surgery is nausea and/or vomiting, but it is a short-term complication that can be managed with medicine.

If you’d like to learn more about gastric plication for weight loss, please schedule a complimentary, one-on-one consultation with Dr. David Davtyan today.